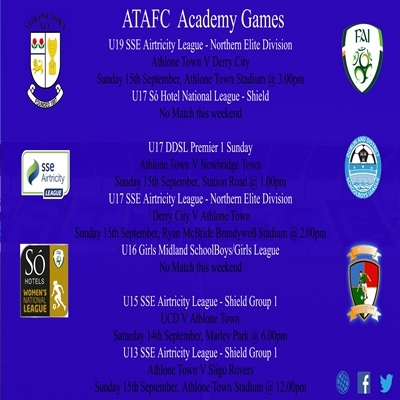 There is plenty of underage of football on over the weekend and if you can come along and support the teams please do as the players really appreciate it.
The U19's are at home tomorrow to Derry City FC and kick off is at 3.00pm so what better way to spend a Sunday afternoon than to come down and support the lads,
The U17 SSE Airtricity League team are playing in the reverse fixture as they will be travelling to the Ryan McBride Brandywell Stadium on Sunday for their game against Derry and a win here is a must if they want to maintain the pressure at the top of the table.
The U17 DDSL team are on the road tomorrow to take on Newbridge Town and they will have a spring in their step after last weeks performance against Belvedere when they were unlucky to concede an equaliser in the fourth minute of injury time.
The U15's are on the road today as they take on UCD in the last game of the group stage of the shield and it's a game that decides who finishes in the top three. UCD are on top with 19 points and both Athlone and Drogheda are on 18 points and with Drogheda playing Longford who only have one point a win over UCD is an absolute must for the lads today. Please note that the venue has changed to the South Dublin Football League ground and that the kick off time has changed to 5.00pm.
The U13's are at home on Sunday to Sligo Rovers and with Sligo looking to claim second spot n the group it will be a tough and competitive game and kick off in the stadium is at 12pm.
The U17 girls Só Hotels National League team and the U16 girls MSL team both have the weekend off.